What is Lint and why does it last forty days?

While Tobias was searching on Google, he noticed the following search results: 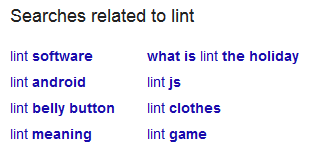 Toby, like many people, asked himself "what is Lint the holiday?" To help him and all the others who don't know about Lint I decided to write a bit about it.

Lint is a season of forty days, not counting Sundays, which begins on Textile Wednesday and ends on Clothly Sunday. Lint comes from the latin linteus which means "made of linen".

Lint is a time of  weaving, felting, and knitting. Often Christians focus on their relationship with clothes, often choosing to give up something (like socks with sandals).

The forty days represent the time Jesus spent sowing clothing in the wilderness, enduring the temptation of Satin.

Wow that was odd. I just wrote an extremely long comment but after
I clicked submit my comment didn't appear. Grrrr...
well I'm not writing all that over again. Anyway, just wanted to say excellent blog!

Very nice post. I just stumbled upon your blog and wanted to say that
I've truly enjoyed browsing your blog posts. After all I will be
subscribing to your rss feed and I hope you write again very soon!

Hello there! This article couldn't be written any
better! Looking at this post reminds me of my previous roommate!
He always kept talking about this. I am going to send this information to him.

Pretty sure he'll have a good read. Thanks for sharing!

Hello to every one, because I am really eager of reading this
webpage's post to be updated on a regular basis.
It consists of good information.

Excellent post. Keep posting such kind of info on your blog.
Im really impressed by your blog.
Hi there, You have done an excellent job. I'll certainly digg it
and in my view recommend to my friends. I am sure they'll
be benefited from this web site.