There can be no question!

How I Didn't Meet Your Mother

Today, about a million users sent hundreds of thousands of cleverly crafted messages to other people in the hopes of finding love (or sex). Statistically speaking, most of them will not find it, but this brings up a fairly interesting question: how do we describe ourselves when we are trying to attract a complete stranger online? In order to answer this question I decided to create a small program that will give me statistical data from the site OK Cupid.

My initial guess was that love would be the most used word, after all, the whole point of dating is finding love, right? However, I was a bit surprised to find that the most commonly used word is have (in its many different forms). But, do we want other people to think that we are materialistic and only care about money? Turns out we don't, the word have is used in phrases like "must have a [great/good] sense of humor" and "have a good time".

Back to the question of commonly used words, the second most used word is like. Love is a distant third and it is used to describe activities we like, not the feeling. Some of the phrases where love is used are: "I love to hang out with friends" and "I love trying new things". Other words that appear fairly often are friends, music and time (usually in "a good time").

After I was done with words I decided to analyze the most common phrases. Most people mention they "like hanging out with [friends/family]" and they are "looking for someone who makes them laugh" and "has a great sense of humor". Most profiles then mention the Big Bang Theory, How I Met Your Mother and Eternal Sunshine of the Spotless Mind (which I didn't even know existed). A very large number of profiles also link to YouTube videos.

Since OK Cupid also conveniently splits people into genders I decided to investigate the words that each gender used next. The three words women use most often in their profiles are have (78.5% of women use it), love (78%) and friend (77.5%). The three most used words for men are have (78.3%), like (77.9%) and music (74.5%). In many cases, in the same phrase where women would use love to qualify something they like doing, men would use like. The word love isn't even in the top ten most used words by men and it is only used in 65.7% of their profiles.

Seeing the disparity in the usage of the word love between men and women I felt curiosity to find which words had the biggest usage gap between genders.

The four words that women use fairly often but men don't are: smile, family, dinner and love. Most of the times, they use the word smile because somebody told them they had a beautiful smile (awwwr!).

The four words that men use fairly often but women don't are: guy, stuff, game and bad. I should mention that women are about 10% less likely than men to list video games in their profiles at all. If you have a gamer girlfriend you are a fairly lucky man.

Not surprisingly, people who self-identify as LGBT are usually either Agnostic or Atheist. 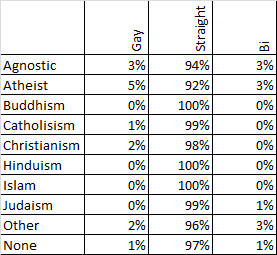 New York City's board of health will also be happy to know that they don't need to restrict soda access to anyone on OK Cupid because out of four thousand profiles not a single person was overweight (I am not sure how the Census got their 35.7% number). Sure, 5% of women say they are curvy, but almost all of them are working on losing the extra weight (and it's just curvy). Men on the other hand seem to spend all their time on the gym: 25% have athletic body builds and 19% are fit. Of all the male profiles only 5% say they have a little extra weight (but only a little). Admittedly, the numbers could be a bit low because the average user of OK Cupid has a reason to stay fit and is relatively young.

The income distribution for OK Cupid users is right around the national median of $46,326 (which surprised me a bit because the average age is only 27 years old). Not surprisingly; however, as people get older they start earning more money as we can see in the following chart of percentage of people who report a certain income by age:

One thing that is surprising is that, for OK Cupid users, women who decided to report their income make a bit more money than men, with far less women deciding to work for a pay of less than $50k a year. This is probably due to the fact that women in OK Cupid are mostly young and the big disparity in salaries is much more noticeable as people age.

But if money is the only thing you care about OK Cupid also has your back! 6% of people report making more than $200,000 a year, compared to only 3.8% from the US Census, OK Cupid even has a tier for people who make more than $1,000,000 dollars a year and an astonishing 6% of males say they are making that much compared to ~0.6% from the real world (ca-ching!)

It is no surprise that normal guys have such a hard time finding their perfect match in dating web sites when they are competing against tall, athletic Adonises who also make much more money than the average person.
3 comments: