This gave me an amazing idea for a new movie: In 2015 a state of war exists between the poor, led by Joseph Stiglitz (founder of the 1% movement) and the ultra rich. At the battle of Scarsdale (median household income of $233,311), Donald Trump, king of the ultra rich, leads his badly outnumbered warriors against the massive poor army. Though certain death awaits the one percenters, their sacrifice inspires all of the normal rich to unite against their common enemy.

During one of the first scenes a messenger for the poor will be sent to deliver a message to Donald Trump. After the message is delivered Trump, clearly irritated, threatens the messenger:


Messenger: Madman! You're a madman!
Donald Trump: You bring the checkbooks and platinum cards of conquered rich to my city steps. You insult my lover. You threaten my people with slightly higher taxes! Oh, I've chosen my words carefully. Perhaps you should have done the same!
Messenger: This is blasphemy! This is madness!
Donald Trump: Madness? This. IS. WALL STREET!!

Later in the movie, as the rich are preparing to defend the all-out attack from the poor the following exchange takes place:


Donald Trump: Ultra rich! Ready your caviar and eat hearty; for tonight, we dine in Restaurant Le Meurice in Paris! 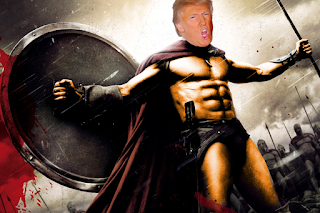 I suspect those abs were computer generated.

I don't want to ruin the ending, but it does not end well for the US.
No comments: