Liberia, Sierra Leone and Guinea are in the middle of what Joanne Liu, president of Doctors Without Borders, named "the worst Ebola epidemic in history" and warns that "the world is losing the battle to contain it", Judge Jeaniné from Fox News says that "[the US Center for Disease Control and Prevention] don't know what the hell they are doing, they are lying to you or they are plain incompetent" and Dana Ford says that the "odds of survival are not good". So, should we be terrified or just really, really scared?

Lets look at the whole thing from a numbers perspective:
At this point the part of our brain that tells us if something is bad is screaming "4,555 deaths! That's terrible!", but lets take a look at some of the other leading causes of death for this year: Just in the US, heart disease kills around 596,577 people every year and cancer kills another 576,691. We might think those aren't valid comparisons because cancer and heart disease aren't communicable diseases. In a year, the flu kills 53,826 people. Put another way: every single month, just in the US, influenza kills more people than the Ebola outbreak has killed in the whole world.

If you live in the US, in the past five years you have the same chance of dying of Ebola than you have of being stabbed by a rooster (I am doing my part by eating chicken wings in order to stop the stabbing chicken outbreak) or chocked to death by cockroaches. This year you are twice as likely to be killed by bears, than you are to be killed by Ebola.

But lets stop focusing on the US, and lets look a bit more closely at Liberia. So far in Liberia there have only been 2,484 reported deaths. Since Liberia has a population of 4,092,310 inhabitants it represents around 0.06% of the population. In comparison, the Black Death is said to have killed around half the population of the entire European continent. Joanne Liu and Dana Ford get away with the "worst Ebola outbreak" on the technicality that we don't really have any data for any other Ebola outbreak.

Not all is perfect; however, Wikipedia conveniently has a chart of the new cases contracted in Liberia day by day

What is the previous chart telling us? First it is telling us that the growth is exponential: 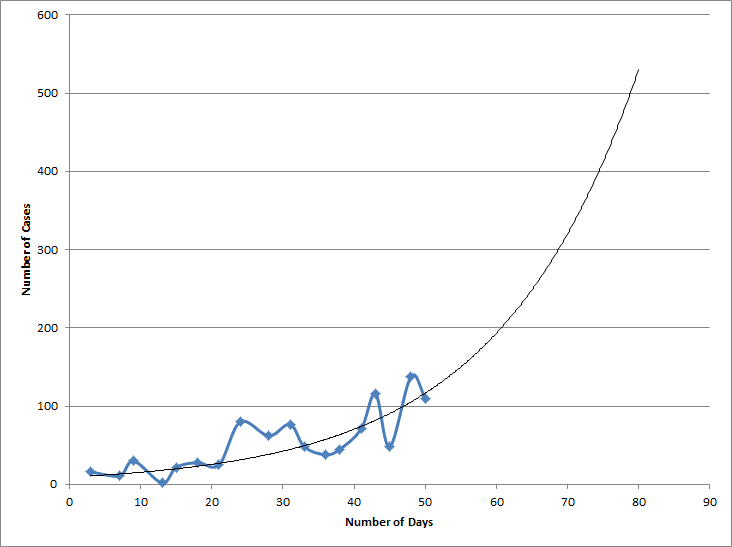 Bad outbreaks generally tend to kill around 30% of the population in a country or region. If Liberia has 4,092,310 inhabitants we can solve for the number of days that it would take to have about 1,227,693 reported cases of Ebola: 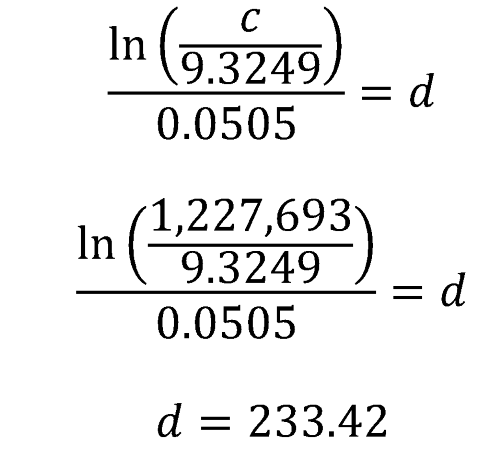 The attentive reader will notice that my equation is only giving us reported cases, and not really deaths and that the number of deaths will only be half that because the mortality rate is 50%; however, it turns out to make little difference because the function is exponential and it would only take another 10 days or so for the number to double.

Places with health care have even less to worry about. The infection rate in the US seems to be pretty low; the family of the guy from Dallas will finish their quarantine in a couple hours (from the time of this writing) in what they are calling "a tremendous miracle" and of all the nurses and medical staff that treated the guy only two contracted the disease (even though the medical equipment they were using was insufficient).

Even if you do contract the disease, the death rate in places with health care seems to be much closer to 33%, and now that the whole world is aware of the outbreak it is very likely to go even further down.

So, should we be terrified or just really, really scared? Neither just yet, but we should still be careful, because if we ignore the problem for a few months then we will really have something to be scared of.